After a long, cold winter holed up in the house, everyone in the family deserves a springtime vacation. However, just because the kids get a break from school doesn’t mean they need a week without learning.

The following four destinations are family-friendly — meaning there are attractions for kids and adults ― and they promise to teach visitors important lessons about the world around them.

The Georgia Aquarium in Atlanta is the largest aquarium in the Western Hemisphere, boasting an outstanding 10 million gallons of water and tanks large enough to hold whale sharks ― the largest fish in the sea. The aquarium is dedicated to teaching visitors about all life in the sea, from the tiniest plankton to the mightiest mammals. Plus, the organization is active in research and conservation efforts vital to keeping the seas healthy for centuries to come.

For those who can’t reach Atlanta, Monterey offers a slightly smaller though no less charming educational experience. Not only does the Monterey Bay Aquarium offer dazzling exhibits of underwater creatures, but families can explore the real Pacific Coast, catching glimpses of sea otters, elephant seals, white sharks, and even humpback whales.

Even though most people imagine Costa Rica as half white sand beaches and half rainforest, the country is actually incredibly ecologically diverse, consisting of 12 ecological zones and claiming more than 5 percent of the entire world’s biodiversity.

Proud of its unique ecosystems, Costa Rica has protected more than 25 percent of its land, so travelers who come to this Central American paradise have no choice but to learn about ecology. Families can explore dozens of national parks and reserves and even participate in ecotourism by volunteering to clean up and conserve endangered ecosystems.

The Galapagos Islands off Ecuador are slightly more difficult to reach ― especially when a family in tow ― but they serve as the prime example of biodiversity and astounding ecology. In fact, it was in the Galapagos that Charles Darwin first formed his theories of natural selection, thanks to the wondrous flora and fauna found on the islands, and families can learn about these discoveries during a springtime trip. 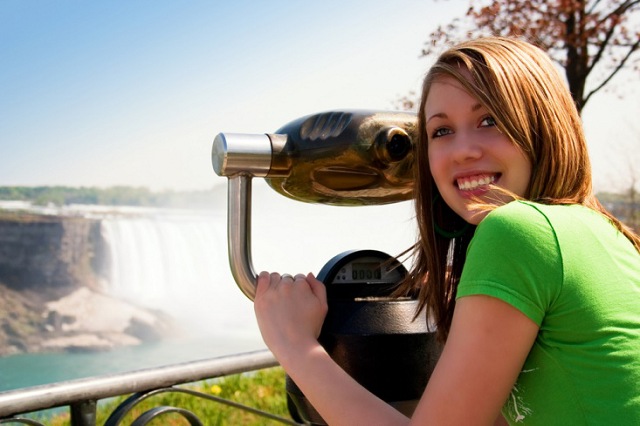 Niagara Falls is the world’s largest waterfall, gushing more than 3,160 tons every second. The impact of that water on the surrounding landscape ― and the effects of the landscape on creating and controlling Niagara Falls ― are geographical marvels well-worth at least one visit. Families can stay in Niagara Falls hotels near Clifton Hill to be close to the exciting attractions kids love and the museums and trails that teach about the falls.

Though not as overtly active as Niagara Falls, the Grand Canyon is equally breathtaking at first sight. Both the falls and the canyon are the result of ancient geological forces, but the Grand Canyon has more than 5 million years on the falls, allowing the waters to work more drama into the landscape. However, unless camping is an option, families can pay exorbitant amounts for the luxury of staying near the canyon, and there is little else to do but admire the rocks.

About 75 million years ago, most of the American Midwest was covered by a shallow sea. As a result, the Midwest is a treasure trove of paleontological information ― and no place is richer in dinosaur bones than Badlands National Park.

In under 30 years, more than 13,000 bones have been recovered from the site, contributing vast amounts of information about the world before people. Families can enjoy their own digs through the PaleoAdventures, which organizes five-day fossil finds around the “Dinosaur Capital of the World.”

While the country’s second-largest metropolis might seem an odd choice for an ancient history–focused family vacation, the fact is L.A. contains a veritable pool of information about American ecosystems during the Ice Age. The La Brea Tar Pits, which were massive swamps of natural asphalt, managed to catch and preserve millions of creatures, which scientists are recovering and studying to this day. Though the area is now covered by Wilshire Boulevard and urban sprawl, the museum is exciting and educational.