Australia is a land of dreams. From the sacred legends of the aboriginal Dreamtime when the great spirits conjured the coral reefs, rainforests, and scorched, red deserts, to armchair travelers who describe Australia as their dream destination, the Land Down Under deserves all the hype. The world’s smallest continent and largest island, Australia is almost the same size as the United States, but with a population the size of New York State and some of the quirkiest wildlife on the planet.

Australia is also a land of staggering contrast and spectacular beauty. Along the coast, visitors can explore vibrant multicultural cities, safari across vast sand islands, trek through ancient rainforests, and dive the Great Barrier Reef. In the Outback, rugged national parks and red-earthed deserts offer the ultimate in adventure travel. Top it all off with a laidback feel and friendly people and it’s no wonder Australia scores top billing on bucket lists around the world. 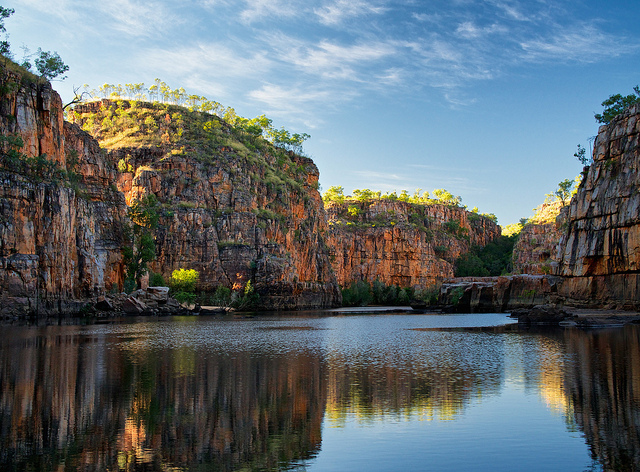 Mention “Sydney, Australia” and most people think of the Opera House. Shaped like huge shells or billowing sails, this breathtaking building on Sydney’s Bennelong Point graces the list of UNESCO World Heritage Sites and is one of the world’s great architectural icons. The location is stunning. Water surrounds the structure on three sides and the Royal Botanic Gardens border it to the south. Danish architect, Jørn Utzon won an international competition for its design, but withdrew from the project after technical and financing problems. Construction was finally completed in 1973 at a cost ten times the original budget. By this time Utzon had left the country never returning to see his magnificent creation.

Today visitors can enjoy a meal at one of the restaurants or take a tour of the building, which encompasses theatres, studios, a concert hall, exhibition rooms, and a cinema. But it’s far more impressive viewed from a distance. One of the best sites to photograph the Opera House is Mrs Macquarie’s Chair in the Royal Botanic Gardens or from aboard a harbor cruise.

Visible from outer space, the World Heritage-listed Great Barrier Reef is one of the largest living structures on the planet. In 1975 the Great Barrier Reef Marine Park was established to protect its fragile ecosystems, which include more than 3,000 coral reefs; 600 continental islands, including the beautiful Whitsunday group; 300 coral cays; and inshore mangrove islands. One of the seven wonders of the natural world, the park stretches for 2,300 km along the state of Queensland, on Australia’s east coast. Diving and snorkeling are spectacular. The astounding array of marine life includes soft and hard corals, more than 1,600 species of tropical fish, sharks, dugongs, dolphins, turtles, rays, and giant clams. Those who prefer to stay dry can view the reef from underwater viewing stations and glass bottom boats. On the mainland, Cairns, Port Douglas, and Airlie Beach are the main launching points for tours.

Deep in the heart of the Australia’s Red Centre, Uluru, is one of the most photographed natural wonders in the country. The striking red monolith forms the centerpiece of Uluru-Kata Tjuta National Park, a World Heritage Area jointly managed by Parks Australia and the traditional landowners, the Aṉangu people. Uluru, meaning “shadowy place” in the local aboriginal dialect, rises to a height of 348 m from the surrounding plain with most of its bulk hidden beneath the earth’s surface. Also in the park are the red dome-shaped rocks called Kata Tjuta . As the sun dips in the sky, visitors gather to watch Uluru and Kata Tjuta transform in the shifting light. A great way to appreciate these sacred structures is to join a tour around the sites led by Aboriginal guides and rangers.

There are also some of the other places that can also be visited when you plan a visit to the fantastic Australia.