Mention the activity of “skiing” to a number of enthusiasts and Jackson Hole riders, and you may get a range of assumptions. Some people do it for exercise, and others for thrill seeking, while others to compete. Jackson Hole invites all types of skiers due to the wide range of slopes and intended purposes of athletes and amateurs. 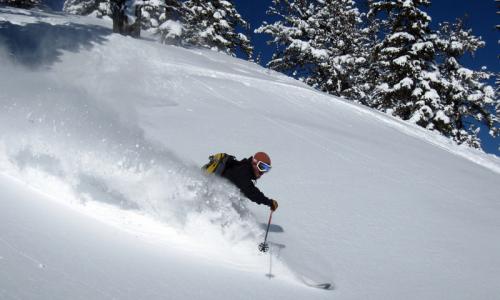 Cross-country skiing is also referred to as Nordic skiing and originated due to limited sources of transportation options. Cross-country skiing dates back to 6300 BC, and has since been used for visiting friends, delivering the mail, and exercise. There are two main styles, gliding and V-shaped gliding. The former involves a straight-forward motion and the latter is more like roller skating or ice skating. Skiers’ heels are not attached to the boot binding, which allows for a wider range of motion.

Also called Alpine skiing, it involves racing downhill versus skiing on a level surface, done while cross-country skiing. Boots are heavy, completely attached to the binding, and rest higher on the wearer’s leg. The poles are shorter while the skis are wider. It’s more expensive of a sport, because unlike cross-country skiing, athletes are in need of a chair lift for multiple runs.

Freestyle skiing incorporates a few disciplines. Moguls, aerials, half pipes, and even snowboards fall under the category. Usually done in terrain parks close to Jackson Hole lodging, parks are manipulated by engineers so athletes can fly off jumps, overcome obstacles, and use a number of elements to perform tricks and stunts.

Mogul skiing is similar to Alpine skiing yet involves navigating around large moguls. While a more traditional need of carving is related, mogul skiers use the torso and legs to evade a series of snow mounds. Because athletes need to combine the skill of navigating around moguls with the speed of downhill skiing, it’s considered an incredibly difficult sport that demands deep concentration and athleticism.

Aerial skiing involves a steep decline that culminates in a jump. Athletes complete flips, turns, and twists in the air, finally landing (hopefully upright). It’s likely you’ve seen the event on television and featured in the Winter Olympic games. Not a version to be attempted by novices, aerial skiers have rich experience on skis and shorter aerial jumps before trying the steep jumps featured in magazines and television programs.

Depending on who you conversate with, a person may think that snowboarding is completely different, yet skiers and snowboarders often share the same slopes, destinations, and desired conditions. As the name insinuates, snowboarding is done on a long, wide board versus two skis, with the board somewhat resembling a skateboard deck. Borrowing some motion from the sport of surfing, riders overcome hills using a slashing, S motion, and in some cases, like freestyle skiing, incorporate jumps, rails, half pipes, and other elements.

Backcountry skiing is for the “naturalists” in the herd. These types of athletes do not use ski lifts, and are considered to earn their turns, hiking uphill or traveling into areas considered off the grid by most skiers and resorts. They seek ungroomed trails and dislike crowds. Not a pastime for beginners, riders often bring along avalanche equipment and are considered experts on skis.

Patrica May has worked in the travel industry as a consultant for a number of years. She enjoys being able to share her insights online and has aired her thoughts across a number of travel-related websites.