Plato had described Atlantis in his work. For many years, people have regarded it as only a story. But now, many people have tried to conclude the Richat structure in Mauritania is the Atlantis. But, claiming something is not similar to proving it. That’s why we decided to write this piece and see if their claim holds any truth. Let us take a look:

Technology today has made great progress. And, this progress has made us aware of many things that we didn’t know exist. One such thing is the Richat Structure, also known as the “Eye of the Sahara.” Residing in Mauritania, this big structure looks very much like a frozen water ripple.

The reason behind the creation of this unique structure is several concentric rings. These rings lie close to one another in a line of low mountains. At the southeast of this structure, one can find the Sahara and its vast areas of sand. This is what its nickname comes from. There is no doubt that the Eye of the Sahara is a mystery. But it is not artificial. It’s 100% natural. 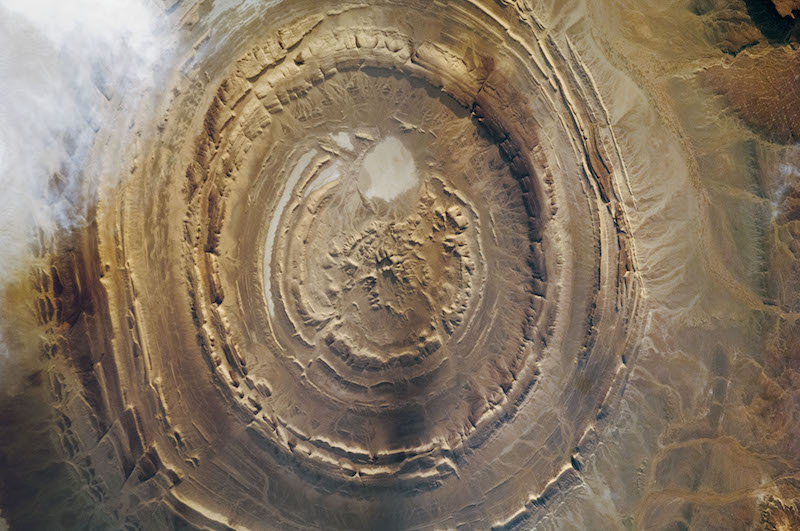 How did the Richat structure form?

Now, if the structure is not man-made, we might ask, “So what caused the structure to form this way?” Well, many people theorize it to be an impact crater. This cause is like ear candy to those who are interested in the Younger Drays.

However, studies show that the structure is much older than that. They also show that it can’t be a crater. Why? Because most impact craters have higher rims with a slight ascent in their middle. Instead, Richat has concentric rings. It is most probably an eroded lava dome.

Imagine a big bubble of lava blowing up till it bursts. It could happen that various sizes of such bubbles had the same fate and eventually formed the ring. Each of these bubbles may have left a ring that eroded slowly and turned much flatter. This is how one of the earth’s most unique structures came into being. 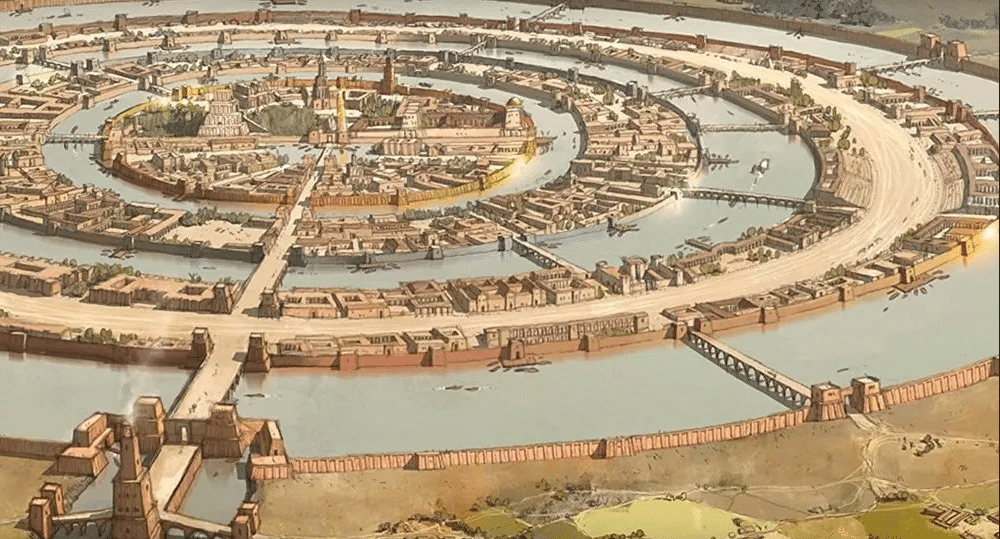 What did the great Plato say about Atlantis?

Frankly speaking, Plato’s work had described a lot of things about the kingdom of Atlantis. Trying to compile all of them into this article would be futile and divert us from the real topic. So, we will be brief and give you only those that we feel had to be mentioned. Here are some quick yet important facts about the Atlantis Plato described:

If the structure was to be Atlantis, it should have at least matched some of the above, right?

Archeological findings at the Richat structure

Stoneworks are known to survive a long time. However, natural forces would surely decay them. The decay could even be to an extent where it becomes impossible to understand if it is man-made. That being said, we have some stone tools here that can help us know the past better.

The stone tools found at the site are vital. Why? Because, if the stone tools stayed there for thousands of years, it could mean only one thing. That is, the area did not experience a seizure by humans very recently. As the tools are there and in context, they point out one thing. The upper layers should have been wiped away. It can never be ruled out entirely. But this structure has not suffered much damage except the signs of weathering.

Another thing could have happened here. That is, the weathering may have scattered the stone tools over the structure. If that was the case, it means that the stones are not in context. Therefore, they cannot serve as a means to date the layers. It could also mean that the destruction of the city, the Richat faced decay. And, gradually, natural forces moved these tools and other things onto the structure.

While we can’t say for sure whether the tools found there are in context or not, we can say this. The structure hasn’t given us anything that we could relate to the Atlantis Plato described. What it has given us, though, are some old, basic stone tools. 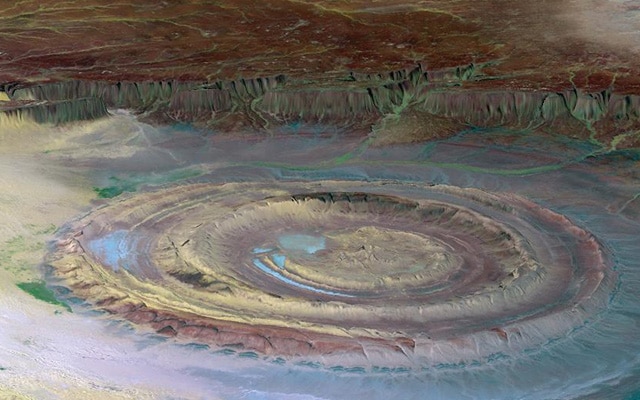 Does the Eye of the Sahara match Plato’s location of Atlantis?

Plato states very clearly that the island of Atlantis was on the Atlantic Ocean. But, as we all know that our structure in concern is on Sahara – a desert. Sure. But, there is plenty of evidence that suggests Sahara was not always a desert. In fact, it was quite the opposite. Many maps, accounts (even Herodotus’), etc., say that Sahara was once a lush savanna. It also contained a strong network of rivers. Some evidence also suggests that Sahara could even have been a sea once. But they are not sufficient, and we need more.

Also, Plato described the Atlantic as being ringed by Asia and Libya. Now, Libya is present-day Africa, and Asia is located to the east of Africa. In Plato’s description, the exact location of Atlantis is a bit vague. But it would be safe to say Asia was the eastern border. And Libya was an island border. These two separated the Atlantic Ocean from the Mediterranean Sea. Thus, Sahara may be a part of the Atlantic Ocean during old times.

Does Plato’s narrative on Atlantis match with the structure?

We can’t say surely. At least, not for now. The location of the structure seems really at the place where Plato described it to be. Plato’s Atlantic was supposed to be there back in 9,600 BC. Our structure in concern could have changed a lot over the years. Maybe it was very much like Atlantis all those years ago. Unfortunately, we have no archeological evidence supporting this claim.

As we said earlier, Plato described the island of Atlantis in detail. Of course, we are unable to measure the 50 stades from the sea. Nor could we find evidence of the canal linking the city with the sea. Also, we know that there are mountains to the northwest of the structure. Plus, we can find the three different types of stones and springs, as Plato mentioned. These are definitely positive signs. Only time will tell what’s what. 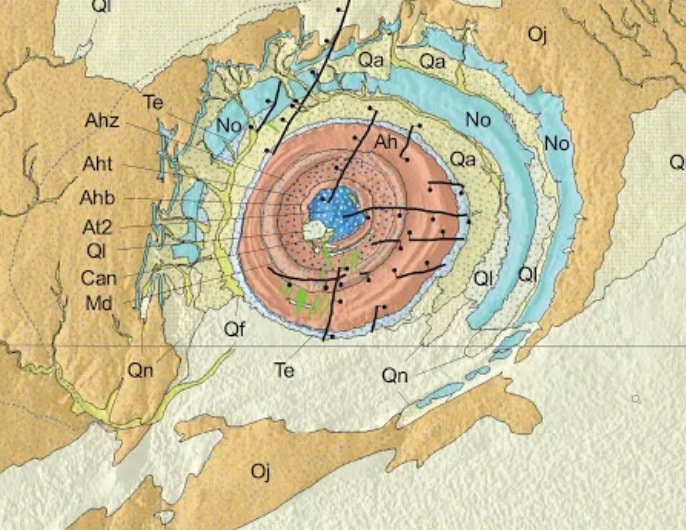 Has the Eye of the Sahara been excavated?

No, it has not. No excavations have been performed on this site. Because of this reason, we still don’t have the answer to whether it is the Atlantis Plato described or not. Maybe in the near future, some excavations will take place here, and we will get closer to solving the mystery.

Is the Richat structure a crater?

Some people have thought the structure to be a crater. But studies have revealed that it is not. A majority of impact craters have higher rims with a slight rise in their center. But this structure has concentric rings instead. Hence, experts have concluded it to be a geologic dome.

How big is the Eye of the Sahara?

The Eye of the Sahara is a large geologic dome having several concentric rings. Its outermost rings measure nearly 25 miles across.

To conclude, the famous Richat structure is a geologic dome and a unique formation in Mauritania. Whether it is truly the Atlantis Plato described in this work or not is a matter of ongoing debate.

Although some evidence indicates the possibility of the structure being Plato’s Atlantis, we still don’t have enough archeological evidence. And, without evidence, the debate will never cease to exist.

Maybe the city of Atlantis was real and the Eye of the Sahara is the remains of that city. Or, maybe Plato was thinking of this structure when he was describing the fictitious city. We don’t know for sure. We could only hope that further research gives us a concrete answer in the future.