“Second star to the right and straight on ‘till morning.” Who doesn’t like sending tourists the wrong way?

Luckily I didn’t give directions to German adventurer Maxi Semsch when he was looking for that particular place. His proclaimed end of the world was Singapore. He reached it after 13,500 km of riding his bicycle through ten countries on the Eurasian continent. Boy, he would have been one angry tourist if he had ended up in Neverland, but he arrived safe and sound in the city-state in 2009. He caught his travel bug in his early 20s, as so many of us do, but his was special species, it urges him to turn his excursions into high-quality documentaries in HD.

His latest Sunday cycle ride was the circumvention of Australia (yes, the continent) on an e-bike, which is now a documentary series available on DVD and Blue-ray. Hearing of such a trip, I couldn’t help but poke him with questions.

How did this dream come about? When did this start?

After school, I started my first trip around the world in 2004. It was planned as a one-year-trip, in the end I was on the road for three years. Aged 24, I had to decide for myself if I should study or try to make a living with my journeys. I chose the second option. In 2008, I cycled on my own from Munich to Singapore and made a film about it, which got very popular. And in 2012 then I cycled around Australia.

Were there any other destinations that you considered before you decided on Australia?

Of course, for me, there are so many places I would like to visit, but Australia was always on top of the list. For me it is a special continent and so different to the rest of the world. And the idea to cycle around this big island has always been in my head, so I just had to do it and afterwards I can now say it was the right decision.

Especially the first meters you will never forget. It took a long time preparing that journey and when, finally, the day has come where you get on your bike and just start pedalling, it’s great. Also, it was a bit stressful, as on the first kilometers I had to cycle out of Sydney. 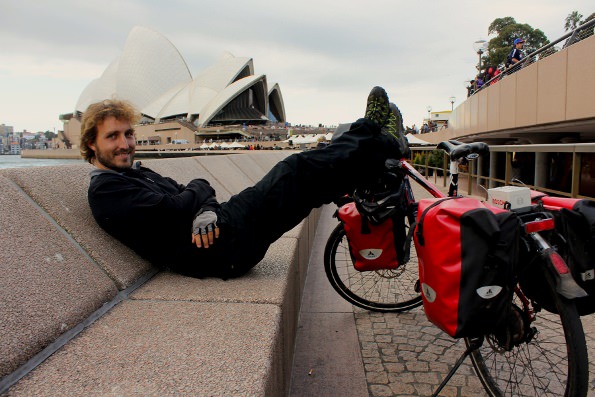 Maxi Semsch Sydney Excuse Me, How Do I Get to the End of the World, Please?

Back in Sydney after 187 days and 16,047 km © Maxi Semsch
And the last kilometers were exactly the opposite. The adventure lies behind you and you know, once you finished the last 20 or 30 kilometers, the trip is over. Suddenly you don’t want to arrive, as you know your flight back to Germany is leaving in a few days. But when I was standing in front of the Sydney Opera House again, I also felt relief as there were many obstacles on the way and we sometimes didn’t know if we had to cancel the trip.

How did you prepare such a trip and how long did that take you?

All in all the preparation took 1.5 years. The route was easy to plan, but as this was a film project there was a lot to organize. I was looking for cameraman for nine months who would like to join the project and I needed someone I could travel with for more than half a year. And of course I had to organize sponsors and partners to support the project, this always takes months as well. 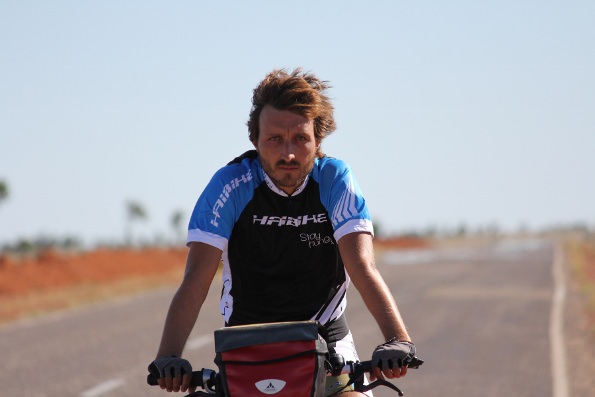 Maxi Semsch in Outback Excuse Me, How Do I Get to the End of the World, Please?
Headwind in the Outback © Maxi Semsch
What didn’t go according to plan? Did you ever feel defeated or like giving up? What made you go on?

There were so many moments where I was feeling like giving up. We had a support car, where Frank the cameraman was travelling in. It was 30 years old and had nearly 400,000 km on the odometer. Of course, we had a lot of breakdowns, mostly in the middle of nowhere in the so-called outback. I had nearly 7,000 km of headwind, which was very frustrating. Then there was this extreme heat, with temperatures of 45 degrees Celsius and 350 km to the next petrol station, with nothing in between. But then again, so many good things happen to you every day, like helpful locals or the encounter with wild animals. That always motivated me to go on and I’m a little stubborn, once an idea is in my head I want to finish it no matter what is in my way.

What surprised you the most and how did it differ from what you expected?

Before we went to Australia everyone warned us about the deadly animals, especially snakes. I think 9 of the 10 deadliest snakes live in Down Under. So it sounded like death is waiting behind every corner in Australia. In the end in seven months I saw one scorpion and maybe 8 snakes. And I don’t have one photo of a snake, as it was always gone until I got my camera out. Way worse than snakes were the insects, like the bush fly or mosquitoes. They gave us a hard time for weeks, but no one warned us of them. And way riskier than animals was the traffic. Australia isn’t a cycling nation, so we had a few very risky overtaking manoeuvers from road trains – they are huge trucks with four trailers, 65 meters long and 110 km/h fast. That was something I was really afraid of.

Maxi Semsch Outback Excuse Me, How Do I Get to the End of the World, Please?
Road trains in the Outback © Maxi Semsch
Can you point out your favourite places?

There were so many of course. Australia is a huge continent. But if I have to mention a few, it was the Great Ocean Road in Victoria, the Karijini National Park in Western Australia, with deep gorges, maybe something like the Grand Canyon of Australia. But I also fell in love with the Australian animals, especially the birds and parrots. I will never forget the twittering of the birds, that was amazing.

What were the most unusual experiences – Strange people, food, animals?

Of course, there where so many experiences, but to pick one: I met a soldier who was walking, on his own free will, through the outback with 40 kg of luggage for more than 600 km and there was nothing in between. A few weeks before, he went the same distance with a car and buried food every 60 km. But somehow wild animals found his supplies. When I met him in the afternoon he only had an apple for the whole day, so I gave him a muesli bar and my sandwich.

Would you tell us your most savoured moment of the trip?’

That is easy to answer for me. My partner Marion was with me on the trip and we got married in Australia, barefoot on a lonely beach at sunset. And for our honeymoon we went to a little island in the middle of the Great Barrier Reef for four days. That was one of the best places and, of course, our personal highlight of the journey.

Great Ocean Road Excuse Me, How Do I Get to the End of the World, Please?
The Twelve Apostles, Great Ocean Road © Maxi Semsch
How did this adventure change you and what are you going to do now?

After such a big journey, I’m so relaxed and there is not much that can shock me, in a certain way you make peace with yourself on such a long journey.

Now I do slideshows about my journey and travel around Germany to tell my story, which is how I make a living. And of course, in the back of my head I’m planning a new trip already…

Congrats, Maxi! I am certainly not going to miss that one, either!

A true European mixture – with Hungarian, German and English backgrounds – Mia Lajos has always felt drawn towards other cultures and countries. A big city girl who moved from Munich to London a few years ago, she is fascinated by the great nature adventures our planet has to offer that push human boundaries, although her own boundaries are easily pushed by a 5k run. Inevitably, she ended up working in the travel industry, where she writes for Kenwood Travel Blog (www.kenwoodtravel.co.uk/blog ) while planning her next great getaway.